Sponsors · Links · Thanks To · Press · Home · CyclingAbreast · The Cause

20/9 - One more day before D Day. Up early this morning to give a "talk" to the kids at the Singapore International School Bangkok. Was sooooooo nervous. Things got better when they started asking questions :) great bunch of kids... curious and eager to ask questions... what a change!!!!
Bicycle arrived in Bangkok on SQ flight with minor scratches but no major mishaps. Had a trial run at the carpark (tiny) of the Swiss Lodge Hotel just to check that the gears were ok.
Can't wait to start the ride. 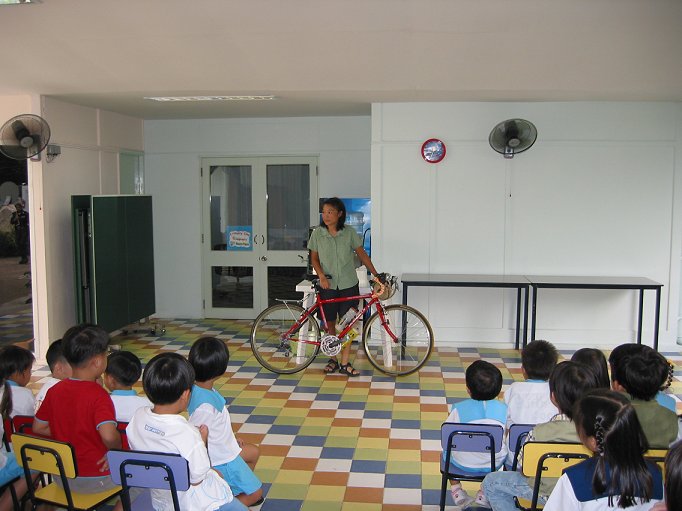 Talking to children at the Singapore International School Bangkok 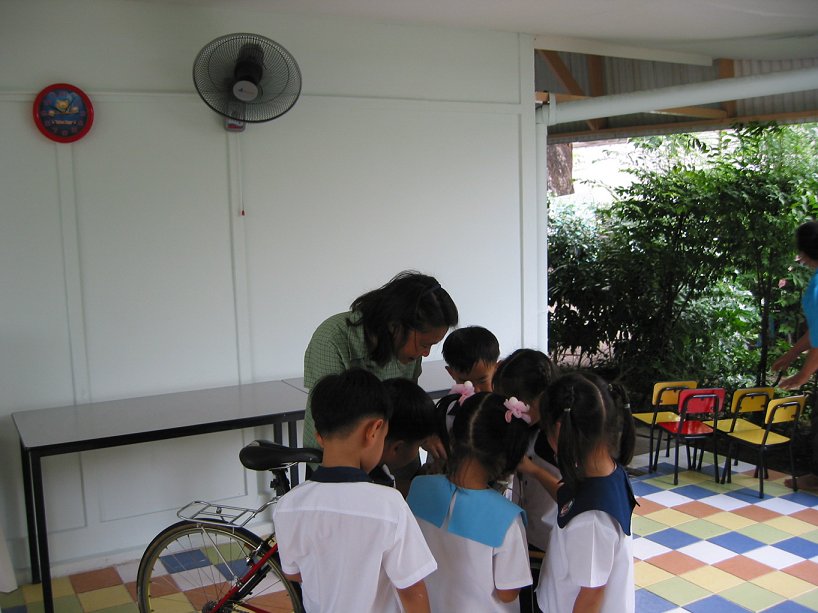 The children having a look at my bicycle


21/9 - 132km to Petchburi. The Swiss Lodge Hotel in Bangkok, arranged for a great send off. There was a big banner and Thai TV was there. Escorted out of Bangkok by some cyclists from Thailand Cycling Club. Road to Petchburi quite flat but weather was HOT and HUMID. Terrible traffic for quite a while. Noisy and bad car fumes. Left hotel
at 0815hrs and arrived Petchburi at 1445hrs. This includes lunch and water breaks. Fell asleep after watching myself on Thai TV7 news :) 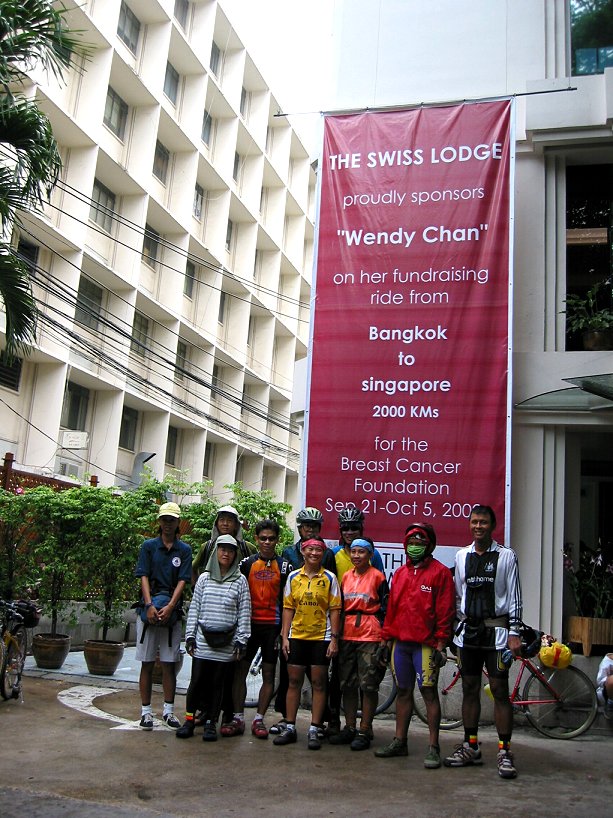 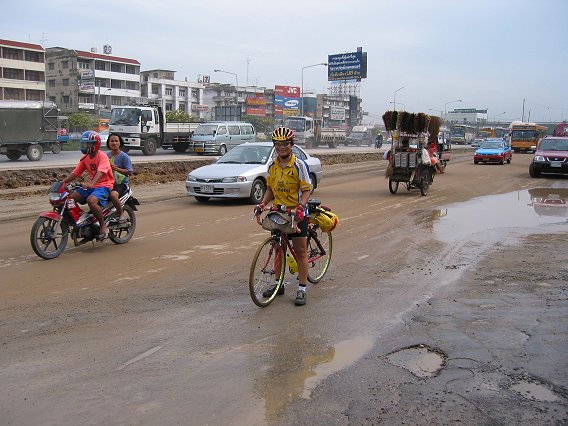 22/9 - Left Petchburi at 0615hrs. Had a nasty encounter with a dog. It must have been hiding in the bushes as it appeared from nowhere and started chasing
me. I was so shcoked that I let out a scream and swerved to the car lane. (Am cycling mostly in the motorcycle lane) Fortunately traffic was light and I quickly regained my composure and shouted at the dog. That did it!
Rode about 60km to Hua Hin and met Romen Bose from Channel News Asia for an interview. It was 0835hrs by then. Was so thirsty when I got there and was a little sugar deprived that Romen bought me 3 cups of SUPER SWEET iced tea. Went on my way to Prachuap Khiri Khan. The last 25km... terrible headwinds and crosswinds. I could see the trees and bushes around me swaying side to side and had to hold on tight so as not to be blown off to the side of the road. Was crawling at around 17km/h. The last 10km, it rained heavily. Arrived Prachuap Khiri Khan at 1530hrs. 162km for the day. Spent some time wiping and cleaning my bike. Now have persistent grease stains on hands and fingernails. Of course I'm not carrying degreaser (too heavy!) and I'm washing my bike gear with free hotel shampoo. 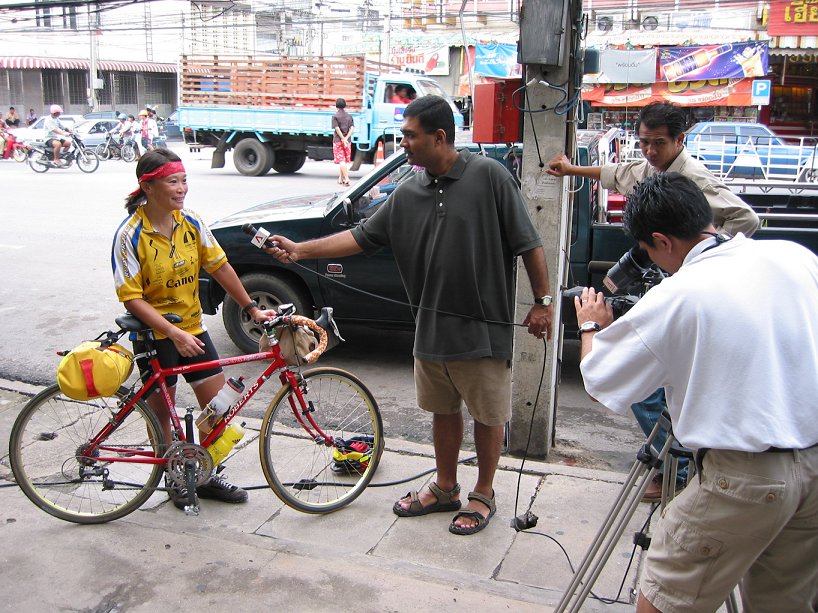 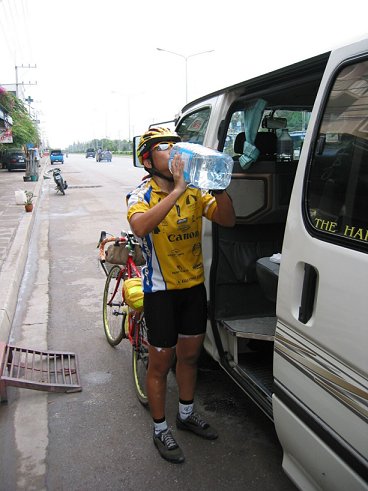 23/9 - A 10hour day today with 6hours of non-stop rain. Total 187km to Chumpon. The last 170km were rolling hills. Some VERY steep ones. Got chased by dog(s) 3 times. But today was just an amazing day. So many people waving and giving me the thumbs up from
both sides of the road. BIG smiles and lots of waves. Someone even got her office staff to wait for me and cheer me on. Lots of headwind as well - it never seems to stop. The President and Secretary of the local Lions Club came and bought me dinner and took me for a
night drive around town. Another long day tomorrow. Leaving at 0530hrs. Have not been able to get to an internet cafe to download photos. But hopefully soon.
Bike was filthy of course due to non-stop rain. More grease stains under fingernails. 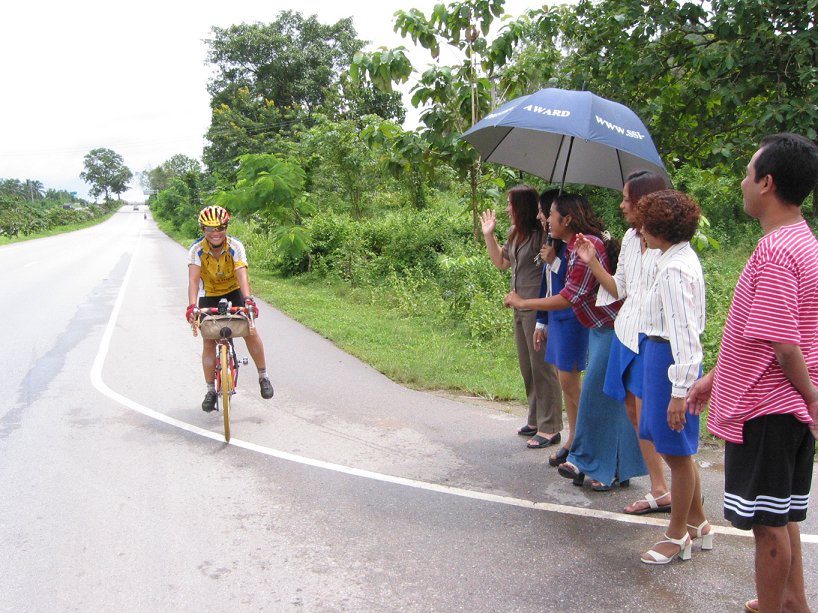 24/9 - Chumpon to Surat Thani, total 189.5km. left at 5.45am and got in 4.15pm.A truck driver was waiting for me at the top of a hill, hand out
stretched with a bottle of Yakult and lots of well wishes.
12 members from 3 different Lions Clubs were waiting for me and took me out for a delicious Thai/Chinese dinner. Knackered... but had laundry to do and had to wash the bike again of course. What would riding a day in south Thailand this week be without rain.... as for laundry, I'm defiantely a washing machine gal :) 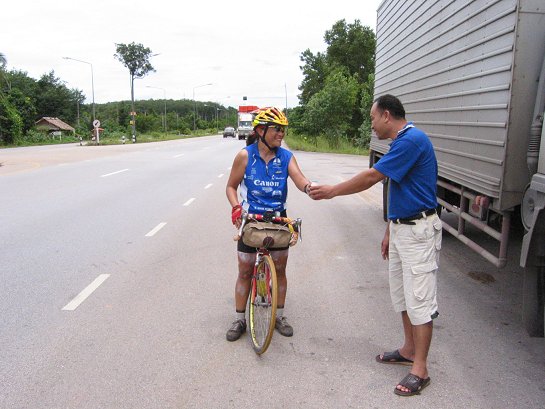 getting a Yakult from truck driver 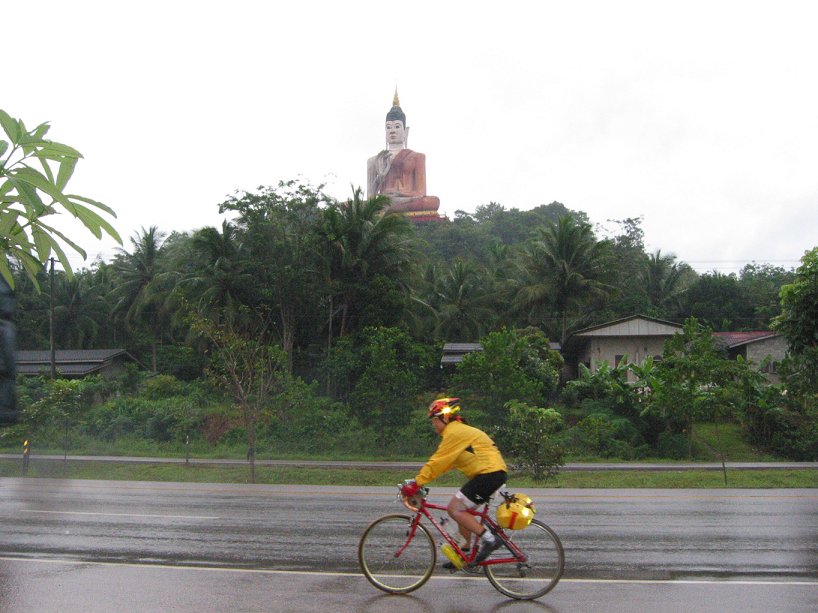 26/9 - was raining when i left Nakhon Si Thammarat at 5am. stopped after about 2 hrs and then it got super hot and humid. the road was mostly flat and was cycling by the sea for a few hours. after that lots of small villages and kampungs all the way to Hatyai. looking a lot more like Malaysia. got in to the hotel at 4.40pm after 205km. On the way into Hatyai, local TV station happened to be passing along in the car, so did an impromtu interview and they followed me all the way to the hotel.
had a buffet dinner (HUNGRY) with 3 Lions Club members.
the shopping here is almost as good as Bangkok, but I CANNOT buy anything, sob :)
on sat, i cross the border into Malaysia. Looking forward to teh tarik !!!!!! (http://www.yuffy.com/tehtarik.html) 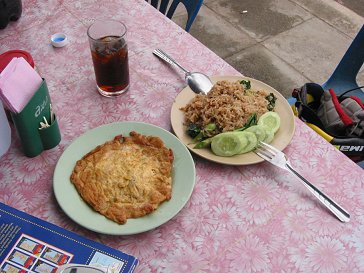 my usual lunch in Thailand, vegetarian fried rice and egg


28/9 - I'm in Malaysia!!!!!! Alor Setar. first thing i did after i crossed the border was to get some teh tarik... after tea in Thailand, the local teh tarik was ssoooooo good :) a Thai customs officer recognised me from tv and came over to chat and wish me well before i went to Malaysian immigration, and to pass
me a snippet of info that the Malaysian queen was popping over to Thailand. apparently she was at the duty free shop then.

Local Lions Club memeber Khoo Koon Wah was waiting for me at the Malaysian side with water and lots of bananas. He also arranged for
another young (20++) Lions Club member to escort me by bicycle to Alor Setar from Padang Besar. Lim Poh Lai was riding a full
suspension malaysian made lerun bike. So we took a lesiurely spin to Alor Setar, stopping often for teh tarik and to take photos. It was
nice to be able to chat to someone in English after a few days and while cycling as well. He pointed out the toursit sites and the local gossip as well......

So nice to be on familair ground in malaysia where the signs are in english. hats off to the malaysian drivers as well, 99% of the time,
they were content to wait for me if I was in their way and never once used their horns... many waved and gave the thumbs up sign as well..

met some cyclists from India who are riding to promote AIDS awarness..they are on Indian made single speed mountain bikes.

alas, my snazzy SHIMANO wireless flight deck meter has more or less died. words cannot express my DISSAPOINTMENT that i will NOT have an
accumateled trip mileage.... does this mean i have to ride this route again sometime soon ???? 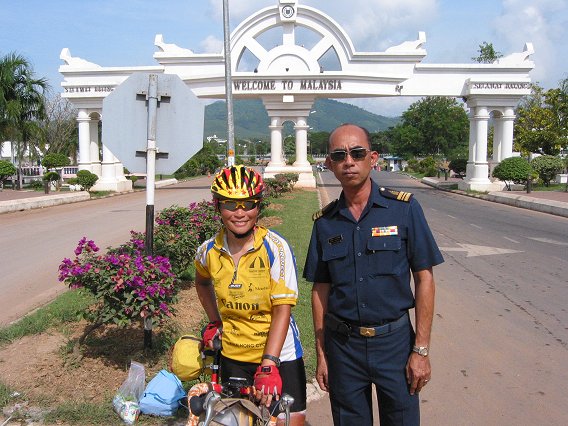 with thai customs official at entrance to malaysian side 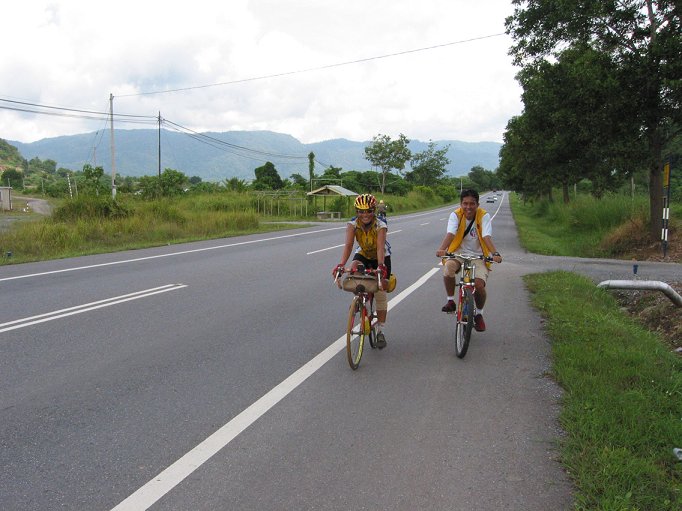 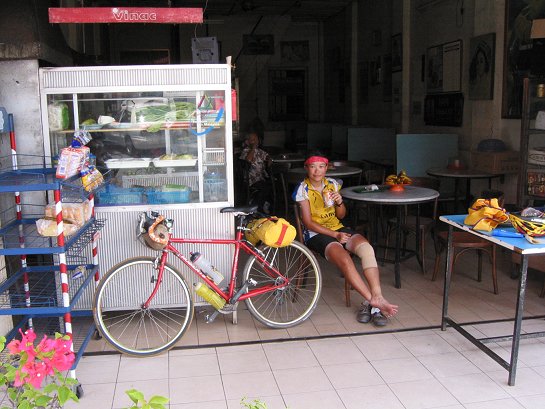 my shoes are too tight for me, buts thats another long story

29/9 - the local Lions club arranged for American expat, Gil Sneed, to cycle with me from Alor Setar to Butterworth. it was a 100km ride. we rode to Mega Mall where some press people were there for interviews. was craving french fries as well, and luckily there was a MacDonalds waiting for me at the mall. the road to Butterworth was well sign posted, but i cannot say the same for
the road surface... almost wish i had a mountain bike with suspension. it was another 90km to Taiping. Altho there were signs pointing the way to Taiping, there was no mileage indicator until I was 29km away. It started to rain quite heavily about 50km away from Taping.
must get back to Taping sometime soon. there were some gorgeous old houses on the way into town. 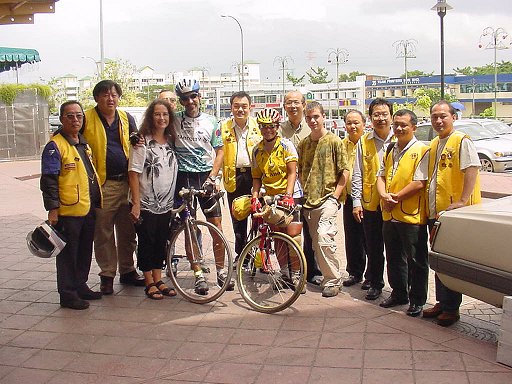 30/9 - A fairly straight road for the 145km to Telok Intan, excep for a couple of bridges. lots of oil plam planations. Went pass Lumut, which is the jumping off point for Pangkok island. Was escorted by car by the Lions Club of Sitiawan for some of the way. Thanks to Patrick Fernandez and everyone else from Lions Club Sitiawan, for the great mangos and for aranging for fresh coconuts from the
plantation :) it was a great ride to be able to stop off at one of the local plantations and have fresh young coconuts on such a hot and windy (read HEAD WIND) day.
had a great seafood dinner with the Telok Intan Lions. Those guys know how to eat!!!


1/10 - a really tough ride to KL via Bidor and Rawang. The head wind started almost at 6am when we left and lasted the whole day. I remember going downhill for about 3km at about 7am and having to pedal ALL THE TIME and my speed was only 15km/hr. This was the same for almost all the downhills troughout the day. The hills were almost all super steep. thank goodness for the granny gear. The traffic into KL was heavy, lots of trucks. luckily, The Lions Club of Bidor and Lion Albert Tan from KL Metropolitan Lions Club provided a 2 car escort for me into KL. 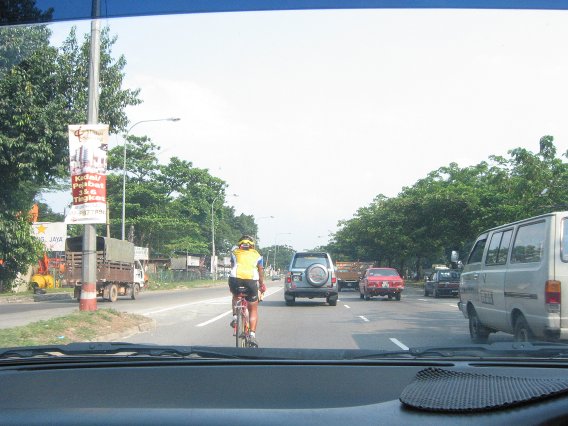 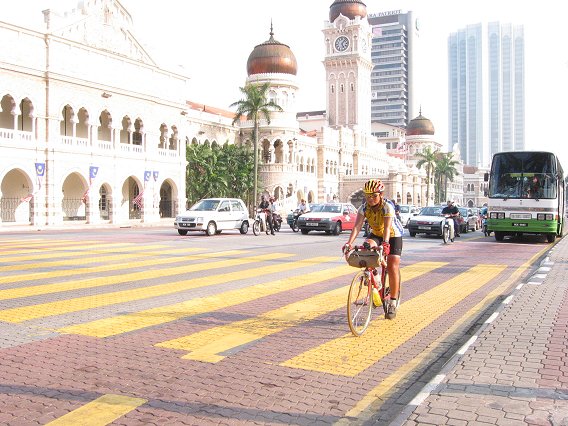 3/10 - 140km from KL to Malacca. Probably the most pleasant ride so far in terms of scenary and road conditions. Was led out of KL by Lion Albert Tan and was riding on the Kajang/Seremban highwway for about half an hour to 45 mins before we turned off and followed road One to Seremban. Just before Seremban, we stopped for a wan tan mee breakfast.
Was suppose to have a police escort into Malacca (arranged by local Lions Club) but alas, the PM of Malaysia is also here for the day... i guess he is just a little bit more important than moi :) 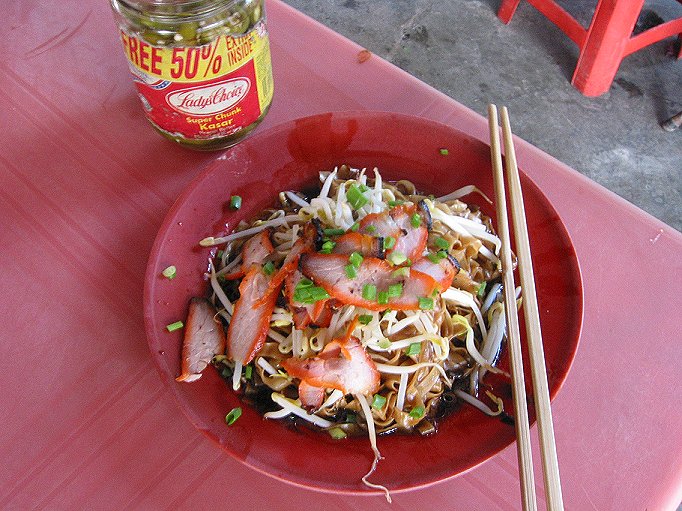 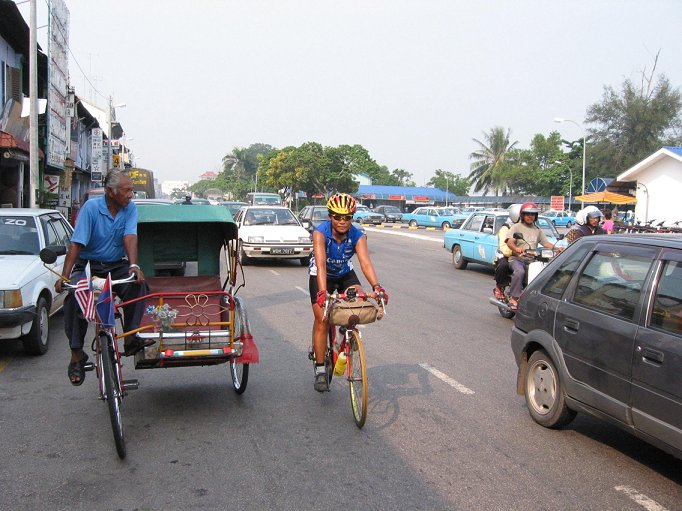 5/10 - fellow Bike Aiders (http://www.bikeaid.org.sg/) Ler, Rama and Michael, rode up from Singapore to escort me to Singapore as I had to leave at 4am in order to be sure to arrive by 11.30am.

in JB, on the way home


Thanks to everyone for all their prayers, support, and encouragement, and for believing.
Nothing I can ever say will fully express my gratitude.

All photos taken with a Canon S40.
Thanks to StarHub, Rudy Project Singapore, Courts, Campers Corner, The Body Shop and all my other sponsors. 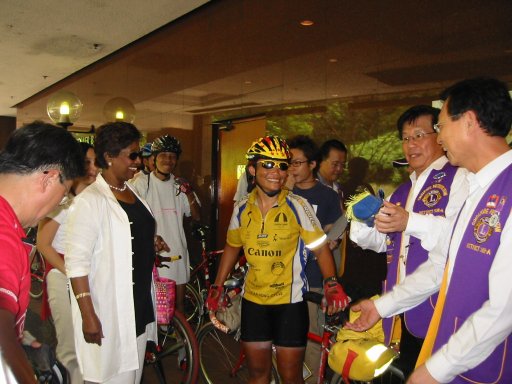 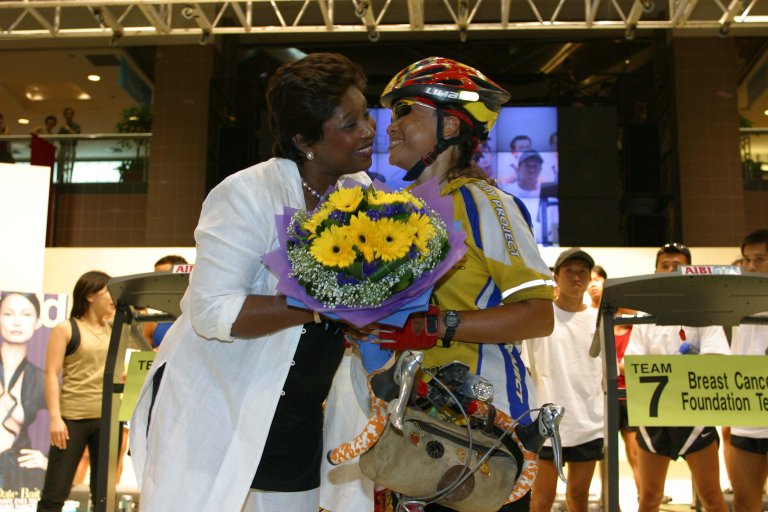 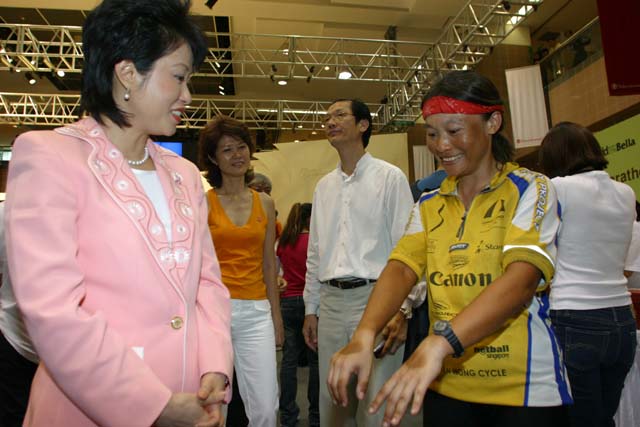